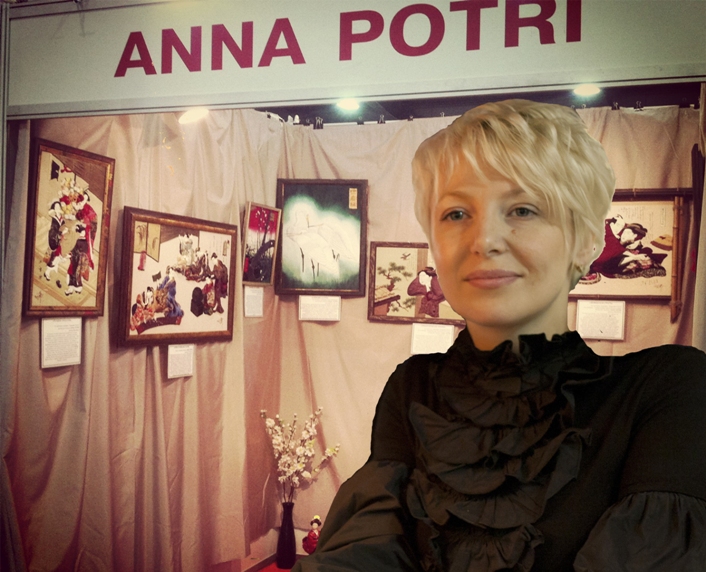 Seen everything in the world

My eyes are back

To you, white chrysanthemums.

Anna Potri is my pseudonym because foreigners cannot utter the name Potryvaieva (Ukrainian surename) at all. By profession I am a lawyer, but deeply romantic in my heart. I live in the south of Ukraine in a picturesque city, surrounded by rivers – Mykolaev.

Interest in patches arose along with clothes for dolls. Picking up the cutters under the tables of the cutters in the mother’s studio, turned them into dresses for the princesses. In general, as with any undertaking, the goal was economic — it was a shame to throw out the scraps. The idea of creating paintings with oriental themes was born at 12, interested in interior details, costumes, and the philosophy of Japan.

Reviving the engravings, making them from flaps volumetric and alive, I kind of give the viewer the opportunity to touch this distinctive culture, to examine and feel every moment of the life of Japan. The details of the interior have been preserved, the complexity of the hairstyles and the color range of clothes that have the depth and volume of the bas-relief are observed.

I gave my work a name, which is often called the Noh theater – “tsuzure-nishiki” – “brocade of rags”, because not separate shreds live in the work, but single characters who are the brocade soul of Japan.

My main goal in this series of works is to convey all my admiration for the distinctive oriental culture to people.

Later,  was born a project from colorful patches of leather, beads, and shells – Faces of Africa.

Well, now I started to develop tightly in all directions of art, I fell in love with watercolor and Digital Arts.