based on an engraving by Shunsho Katsukawa 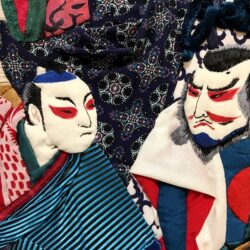 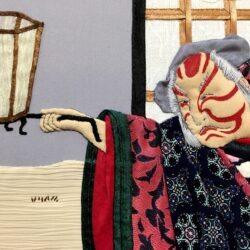 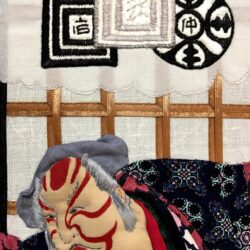 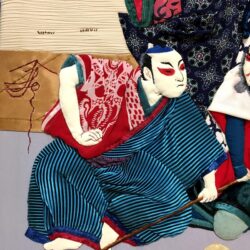 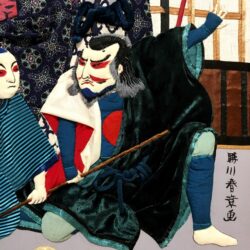 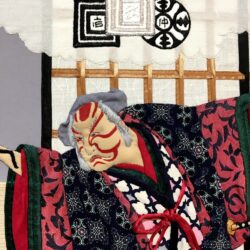 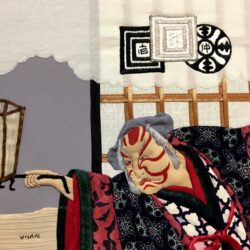 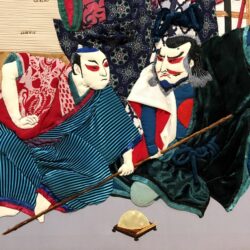 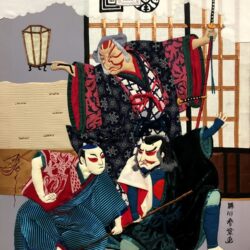 The theater stage, which depicts the actors in the traditional Kabuki make-up – kumadori. In Kumadori, makeup is applied with lines that accentuate the actor’s facial features for an even more dramatic effect. Red lines usually symbolize goodness, honesty, justice. Blue – evil, aggression, accessibility. Kabuki actors applied their own makeup, which was very individual, although there were some canons. Previously, to enhance the effect, paint could even be applied to the tongue or eyes! In kabuki plays, there are scenes where the actor has to open his mouth wide and stick out his tongue. In these cases, the actors smeared the tongue with blush to accentuate its redness. During the Edo period, there was even a tradition, after the performance, the actor applied a napkin to his face, making an imprint of makeup, and passed this imprint as an autograph to fans.

One of the most important special kabuki techniques is mie, a sequence of sharp movements that culminates in an expressive pose of the actor. In doing so, the actor also makes a stylized facial expression with narrowed eyes. It is in this position that the actors are.

What’s more remarkable. Above, on the cloud, we see Mon – this is the actor’s coat of arms. In reality, Mon was wearing the actor’s kimono so that the viewer could recognize the actor in the makeup. This was also done so that the actor who played, for example, a samurai was not accidentally confused with a real samurai and did not start a quarrel.