What do we know about Japan? As a rule, for average people, Japan means sushi, samurai, ninja, geishas and exotic Japanese design. But Japan is much more than that. It is a philosophical and aesthetic look of admiration at the world around, at every moment of being in all its beauty. 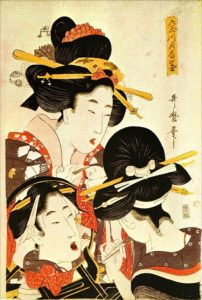 And the Japanese engraving – the greatest and the brightest impression of Japan for the western world – has got this very name, ukiyo-e, “images of the changing world”.

In the centre of artists’ attention there are several subjects and areas: beautiful women – courtesans and geishas, as a rule (genre – bidzin-ga), 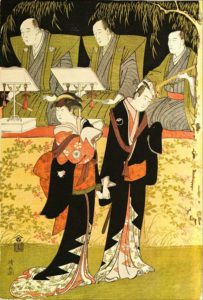 actors of the Kabuki Theatre and the scenes from the No Theatre plays (genre – yakusya-e),

the images of samurai and warriors, and battle scenes (genre – musya-e). 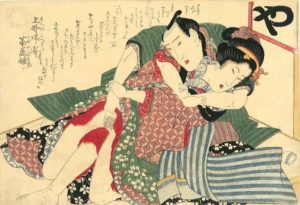 In my childhood, when I was admiring beautiful geishas and fighting samurai, I wanted to have a better look at everything, touch every hairpin and magnificent coiffures, feel soft and smooth silk of kimono. And today making the ancient engravings live and raised with the help of patches and embroidery, I give an opportunity to the audience to touch this original culture, to look at every detail of life in Japan and to feel it. 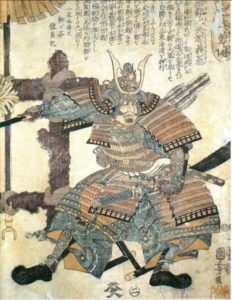 The interior is preserved as it was, the clothes color scheme and hairstyle complexity follow the original ones and have the depth and space like the bas-relief. I called the created technique with a Japanese term of “tsudzure nisiki” which means brocade made from patches, because not separate patches but a single character, a single whole lives in the work and this character is a brocade soul of Japan.

Author’s patchwork made according to a unique art-quilting technique after the Japanese engravings will be a valuable decoration for your interior and a stylish gift for any occasion. The works can be made to order in any size and style